My Mamiya C2 is balky at best.  The lens is good, the shutter strong, but it is unreliable in its film advance.  I’m not sure if it’s something I can fix, so rather than send it in and have it repaired, I bid on a C220 on eBay.  I have used the C220 before; it’s a big thing, much larger than other twin-lens reflexes, but it has advantages that make it preferable over other cameras.

First, the film transports straight across the film plane rather than rolling from the bottom of the camera, making loading easier and reducing the possibility that something will get onto the rollers and scratch the film.

Second, the camera has a metered advance and double-exposure protection, so although you have to manually cock the shutter after winding the film, you know that if it lets you shoot you’re not going to double expose.  (Yes, I know that double-exposure is POSSIBLE, but in general use it’s not.)  The C220’s big sister, the C330 — which I do not own — cocks the shutter with the winder as well, but it’s considerably heavier than the C220.  Considering that the lenses are exactly the same, it’s a bit of a no-brainer to get the C220 over the C330.

Third, and perhaps most importantly, the lenses are interchangeable.  This, to me, is important as I like to do many different kinds of shooting and while being stuck with one focal length can be a challenge, sometimes I like having a wide-angle or a telephoto available for more versatility.   Couple that with the fact that the C220 can take any of the wide range of Mamiya TLR lenses (even the very early ones), the bulletproof Seikosha shutters and the beautiful glass, and you have a real winner.

A while back, I took the C220 downtown to play with it.  I don’t shoot it as much as perhaps I should, but here are some images. 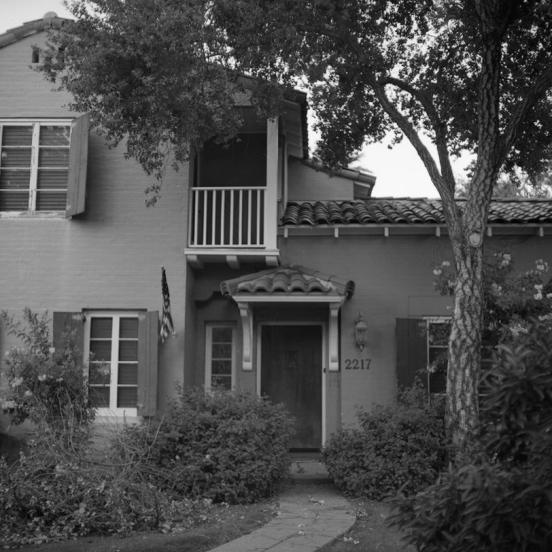 The Mamiyaflex C2 was a groundbreaking twin lens reflex camera.  Unlike the Yashicamat, Graflex 22, and others, the C2 had interchangeable lenses and finders, and quite the list of accessories and lenses to go with it including flashes and pistol grips.  The C2 was made from about 1958-1962, so far as I can tell, and this one is in very good cosmetic condition for its age.  It came with its original leather case, has a standard waist-level finder and a normal 80mm f/2.8 Seikosha-shutter Mamiya-Sekor lens.  The body serial number is 78797and the lens serial number is 564675.  It has a really cool stamped metal lens cover, which I quite like.

Here’s the camera in question:

Using one of these cameras takes some getting used to.  Everything is backwards, so composing the image initially takes some time.  I naturally tend towards a left tilt on my horizons, and there’s a nice little line across the viewfinder to help me level the shot. And since the shutter and the winder are not connected in any way, it’s REALLY easy to make a double exposure.  I have not yet done this but I expect as I use the camera more, it’ll eventually happen.

Image quality itself is what I would expect from an old Mamiya TLR: sharp throughout, good detail, and a nice square negative.   Here is a contact sheet of the first roll I ran through this camera.  I think there may be a strip from the second int here as well, but I can’t remember.  These were shot in September heading up towards Greer, Arizona.

The weird thing about the C2 is its film transport and winder system.  There’s a little lever under the film winding knob that has to be moved in order to advance the film to the next frame.  I’m not sure if I’m doing something wrong, but the first roll I ran though this camera came out beautifully but subsequent rolls are only half-exposed, and the images that are on the exposed half of the film are either overlapped by about 1/5 of the frame, or are so close to one another that there is no space between the images to cut the film. I just need to figure out the winding thing. I’m thinking if I wind twice for each shot, maybe it’ll work better.  I’m currently on the road with this camera and so I’ll try it and report.

In this pair of scans you can clearly see the film overlap problem.  I can still use the middle of the image, though, which is nice, I guess.

Here are a couple of larger images — basic film scans with little touchup, only some spotting — that show the overall image quality.  The first is in a field north of Greer, AZ, and the other is a derelict Aeronca Chief at Glendale, AZ. Note that the Aeronca photo is only the middle of the lower image in the filmstrip scan. 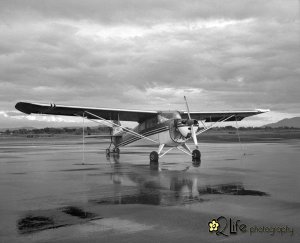 I think that once I get this film transport thing figured out, this will be a great addition to my arsenal of photography equipment.

I’ve been a camera collector for years. I love the feel of an old camera: the weight and precision of its metal body and lens barrel, the satisfying CHUNK of a mechanical shutter moving, the buzzing of a mechanical self-timer… they just feel right.

People keep giving me cameras because they will never use the old film ones again (if they ever did in the first place).  They multiply like rabbits in my living room, garage, photo equipment closet…  There are cameras everywhere. Most of them work, as far as I know, and so I decided to start actually using them.  I signed up for a film photography class so I could get used to a wet darkroom again, bought some film, and cleaned some very dusty lenses.

So here goes.  I’ll try to give as much information about the individual camera, film, processing, and so on as I can as I go through this.

First to the film.  Since this is more of an experiment than anything, I dug out my old bulk loaders and purchased some Kentmere 35mm bulk film.  For those who do not know Kentmere, it’s produced by Ilford, I believe, and it’s really quite inexpensive. This is perfect for me right now, because I do not want to be worrying about the dollars when running film through a camera that may or may not work.  For the medium format stuff (the 120/220) cameras, I use Kodak Tmax 100.  Tmax has been around forever and it’s always reliable.  Large format, well, I got some Ilford Delta 100 sheet film.

Chemistry is more than a little bewildering, and so initially I went with what we are using in the classroom darkroom: Sprint.  The Sprint stuff seems to work well enough, but I ended up getting a bottle of Ilford fixer (for reasons I’ll explain later) and I just last week got a packet of Ilford Microphen developer, which I’ve used before and I believe will give a little finer grain in the images during processing. If I think about it later, maybe I’ll run a side-by-side test of the two developers using films shot in the same conditions and developed with the different developers. We’ll see.

So, without further ado, on to the cameras!